Brett, a native of Minnesota, is the Founder & President of Hockey International.  Hockey International is a leader in speed-training for hockey while utilizing specialized sensory-development techniques to help players of all ages develop in these areas.   Additionally, the on-ice and off-ice “testing” program provide an objective view of player development as it relates to in-season and off-season programs.   Visit www.hockeyinternational.net for more information.

USA Hockey:   Brett has also been part of the USAH Women's National program since 2014, working with the development camps.  Brett also was the Associate Head Coach of the 2018 Gold Medal USA Women's Olympic Team.

Coach Strot  played 10 years professionally in the ECHL, UHL, ACHL, IHL & WHA2 and was a three-year letter winner at the University of Minnesota. After retiring from the game in 1997, Strot became the general manager/coach of the Jacksonville Hammerheads (Southern Elite Hockey League) to start his coaching career.  Subsequently, Strot teamed up with families from the southeast to form an independent U14 AAA team that reached the USA National Tournament in 2006-07.

Prior to moving into junior hockey, Brett was an assistant coach for the Jacksonville Barracudas of the Southern Professional Hockey League (SPHL) working with former NHLer Ron Duguay (head coach). During the 2003-2004 season the Cudas won the regular season title and the President's Cup playoff championship.

After another strong season with this AAA program this team jumped into the juniors as the Jacksonville Ice Dogs in the 2008-2009 season finishing runner-up in the tough MJHL and heading to the USAH Junior national tournament. Four of those players are now playing NCAA Div-I hockey with one local Jacksonville FL player, Brian Ferlin, signing an NHL contract with the Boston Bruins in 2014 with others moving on to NCAA Div-III and ACHA clubs.

The move of the junior organization to the Tampa area in the 2010-11 season took the family to Bradenton florida where Brett and his wife, Tammy, have two children, Maverick Bretson & Aspen Rae.

Garrett Strot is a native of Minnesota and has been with the Tampa Bay Juniors since 2013.

Prior to coming to Tampa Garrett coached 5 years in the NAHL as Head Coach of the North Iowa Outlaws and Coulee Region Chill and an assistant with the Aberdeen Wings.    While in the NAHL, 26 of his players went on to play NCAA Divison-1 hockey.

Prior to the NAHL Garrett spent 14 years as Head Coach of Osseo (MN) High School.   While there, another 14 players went on to NCAA Division-1 and 6 went on to play professionally.  Overall Garrett has 30 years of coaching experience.

Garrett has a B.A. in Physical Education from Bethel College (MN) where he played 4 years and held NCAA Div-III record for most games played in a careers.    Garrett has a son Jesse who lives in California.

Also a native of Minnesota, has been coaching and coordinating player
development programs in both MN and in his current resident state of FL. He has worked with numerous USAH Select programs, Select Teams and is the
USAH Associate Coach-in-Chief in the Southeast District/FL.

"Rett Vossler, a native of Houston, Texas. owns and operates “Sporatun Sports Management”, a hockey agency, helping players further their careers at the professional level. From an early age, he fell in love with the game of hockey, and has dedicated his life to being involved in many facets of the game.

Prior to coaching, Rett spent 18 years on the ice as a player, including 5 seasons at the professional level in Europe. Today, Rett offers a wide range of knowledge as a coach in skills training, structured systems, team leadership, and player advancement.

Filip Kuba is a native of Czech Republic.  Drafted by the Florida Panthers at the 1995 NHL Draft, Kuba played 14 seasons in the National Hockey League from 1998-2013 with the Tampa Bay Lightning, Minnesota Wild, Ottawa Senators and Florida Panthers. In 2004, he was selected as an NHL All-Star as a member of the Wild.

Glen, a Boston, MA native, started with the Tampa Bay Juniors in 2017.   Glen has been working with goalies in the Florida and New England areas since 2011 and works closely with Ed Walsh, who has worked at the Division I College level the past 25 years and currently is with North Eastern.
Glen also was the goalie coach for the 2018 Gold Medal USA Women's Olympic Team while they trained in Tampa. 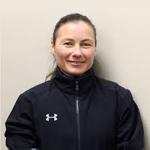 Tasha is a native of Moscow, Russia. She specializes in Figure Skating, Power Skating, and Off-Ice Training.

Tasha skated professionally for seven years as a Principal Performer with the Russian Ice Theater, Russian Starts on Ice, and Disney on Ice. During this time, she also coaches figure skating in various locations as she travelled around the world. After moving to the United States, she began to coach ice hockey, also.

Director of Broadcast and
Media Relations

Christian, a Tampa native is a Student at Full Sail University studying sports broadcasting. He has a hockey background, playing in his youth and later for the University of South Florida development program. He was the Public Address voice of TBJ last season. Christian also covers the Lightning for the Scrum Sports, a local media outlet that follows the two-time defending Stanley Cup Champions. He loves supporting hockey in his hometown. His goal is to eventually become a broadcaster at the highest levels of hockey. "I am so excited to be starting my broadcasting career in Tampa Bay. Seeing the game grow here has been amazing. I'm so happy to be calling games at this level, and to do it for my hometown team makes it even more special."

He specializes in injury assessment, injury prevention, along with athlete education, rehabilitation, strength and conditioning, and functional/sport specific training to help return athletes back to play.